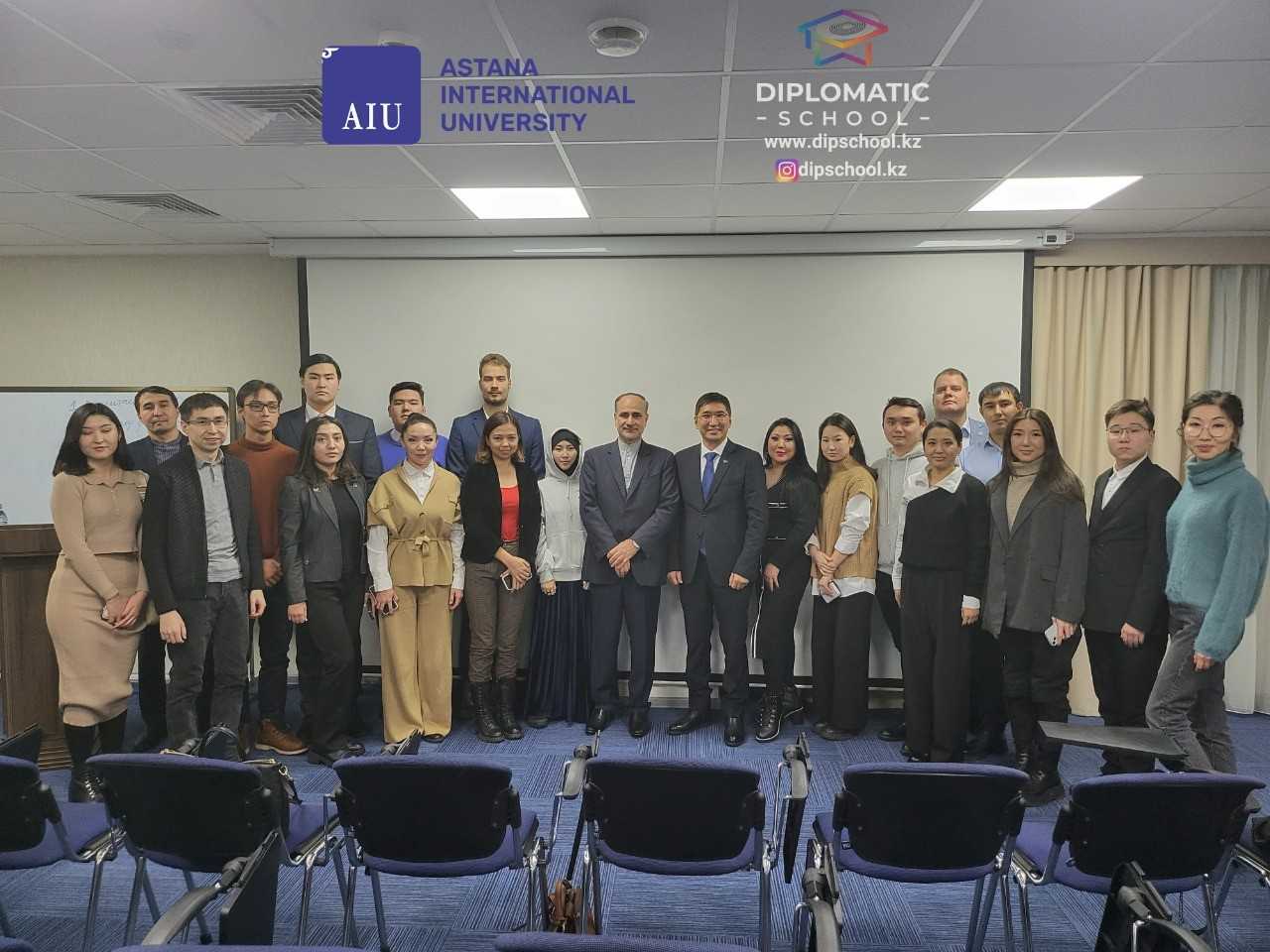 The Higher School of Social Sciences and Humanities, together with the Astana Diplomatic School, organizes a series of lectures by....

On November 25-28, 2022, lectures by the following speakers were held at the Astana Diplomatic School:

1. Majid Samadzadeh Saber – The Extraordinary and Plenipotentiary Ambassador of the Islamic Republic of Iran in the Republic of Kazakhstan.

2. Kestutis Jankauskas - Ambassador of the European Union in the Republic of Kazakhstan

The speakers spoke about the peculiarities of diplomacy, culture and traditions of their countries. The lectures turned to be an interesting conversation, where everyone could ask their questions.

Kazakhstan - Uzbekistan cooperation in the framework of education. 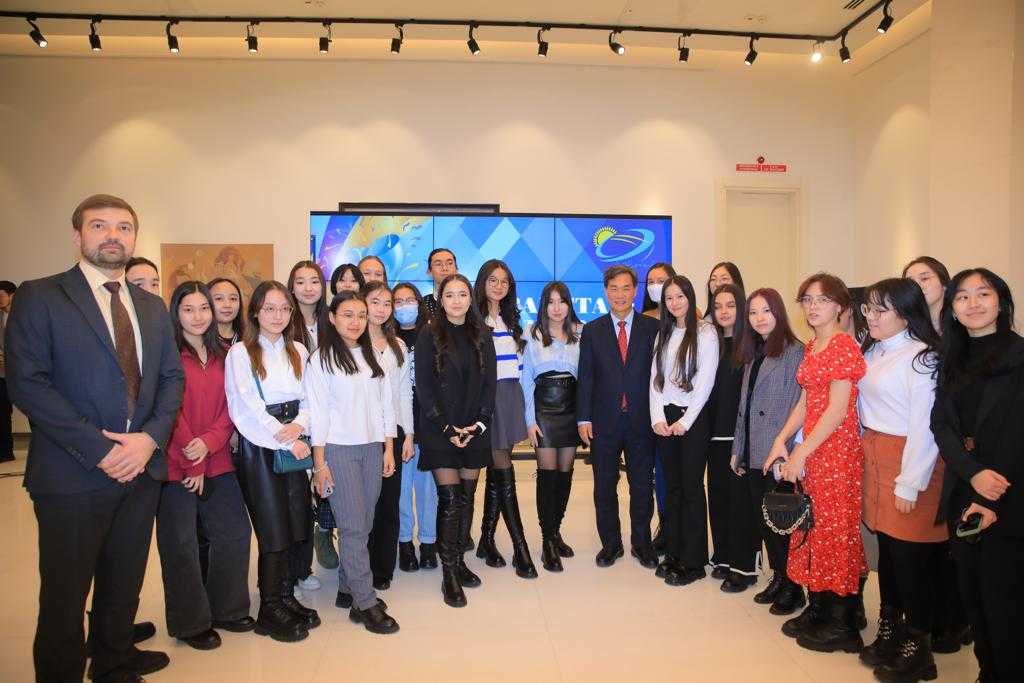 On November 24, students and employees of AIU visited the Library of the First President of the Republic of Kazakhstan

Nov 24th, students and staff of Astana International University visited the Library of the First President of the Republic of Kazakhstan, where, as part of a series of meetings with well-known public and state figures, prominent scientists and well-known experts, a meeting was organized with Professor, Director of the International Institute for Intellectual Development (IMEI) - Mr. - JO GYU YUN *.

Mr. JO GYU YUN held a master class on the topic of mental education, arousing genuine interest among all those present. The lecturer made an excursion into the past of his country and introduced the participants to the success story of South Korea on specific examples.

All those present highly appreciated the professionalism of Mr. JO GYU YUN and expressed their hope for similar meetings in the future. 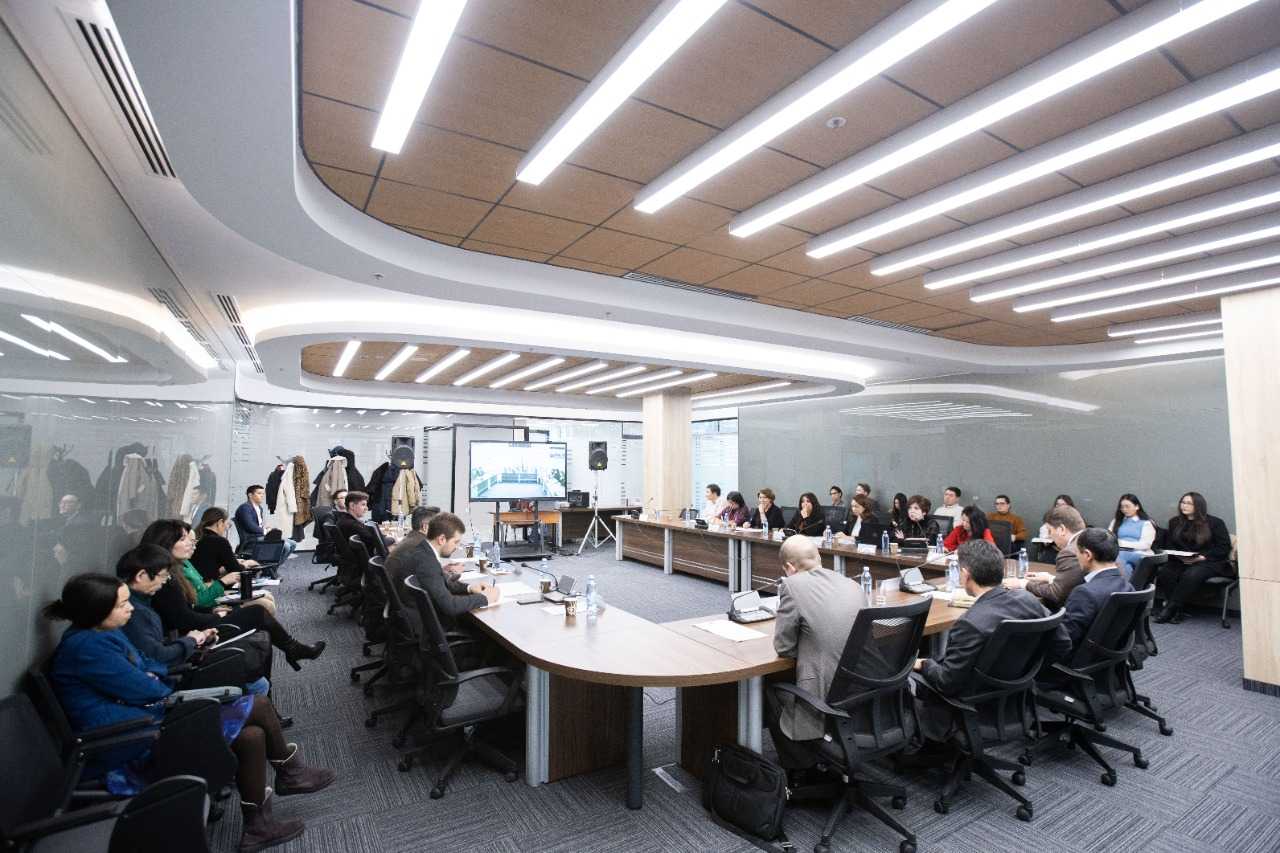 A strategic forecasting session "Central Asia + Russia: new horizons of cooperation to create a common future" was held at....

The event was attended by more than 30 Kazakh and foreign experts and specialists in this field, including representatives of the Russian Embassy. The moderator of the meeting was the director of the CAI "Eurasian Monitoring" Tazhibaev Alibek Timitaevich.

The experts suggested more active discussion of Foresight issues within the academic community of Central Asia, since the recommendations of these meetings are aimed at ensuring the stability and security of our countries.

In continuation of the forum held in October in Astana in the “Central Asia + Russia” format, the participants of the foresight session focused on finding recommendations and proposed ways to solve the following tasks:

1. Creating an image of a probable future on the territory of Greater Eurasia

2. Building a scenario for the transition from the present to the desired future in the form of a "road map" to enhance cooperation between the five countries and Russia

3. Formation of a set of strategic initiatives that will make it possible to fully implement the ideas of the forum participants.

It is planned that such meetings will be held on a regular basis. 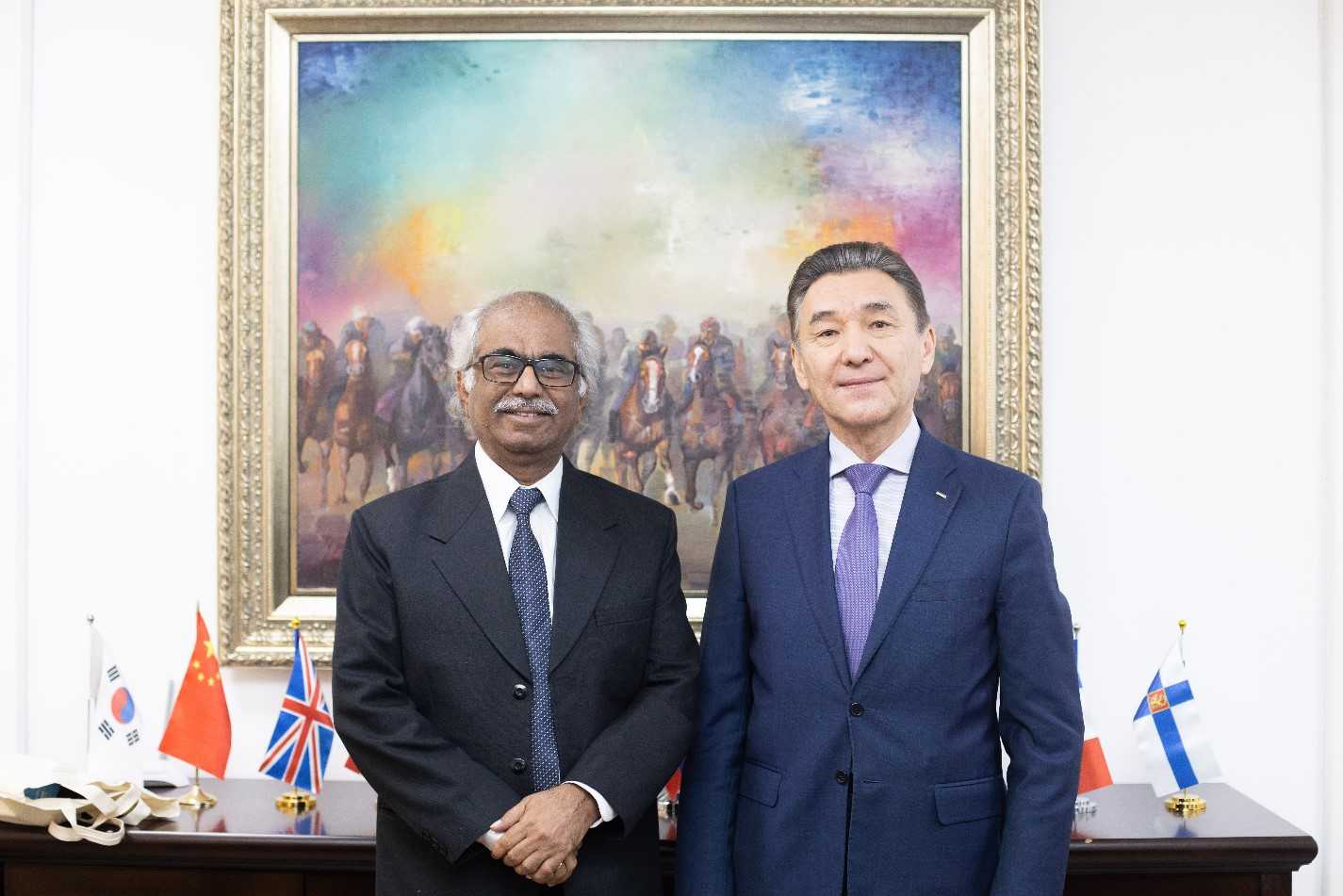 The Higher School of Social Sciences and Humanities and Fatima Jinnah University (Pakistan) signed a memorandum of cooperation.

An important event for our university took place on Monday 21 November 2022. A professor from Islamabad University, Pakistan (IRP) visited AIU. During his visit, an introductory lecture was held for students of the specialty of international relations, as well as a meeting with the management of the university. The main achievement of the negotiations was an agreement on cooperation between Astana International University and the university named by Fatima Djin (Islamabad). Thus, a unique opportunity has appeared for students to receive education within the framework of a joint program of academic mobility. We invite all interested students to take part in the educational program on academic mobility. 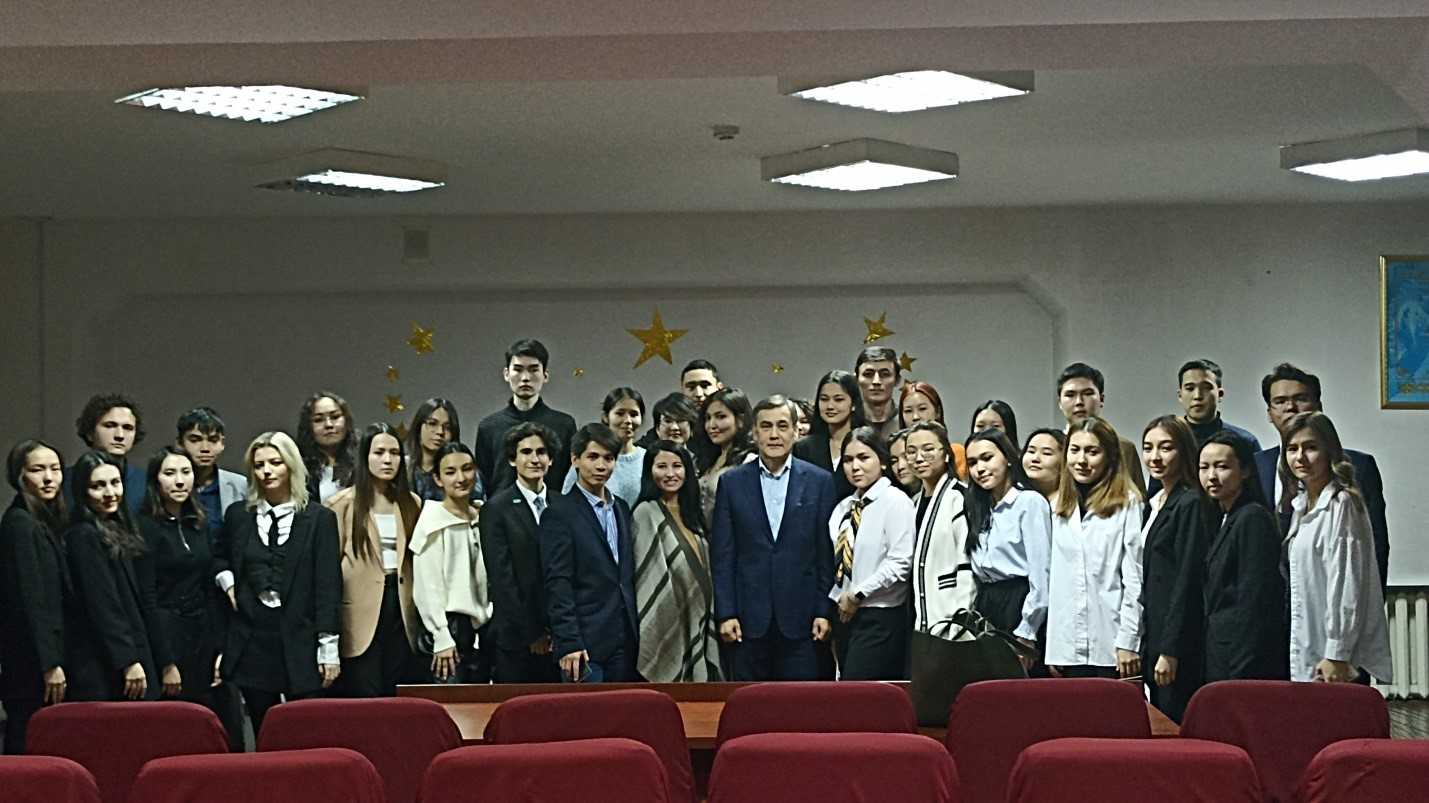 Motivation and self-education are important conditions for achieving the goal

On November 24, 2022, Honorary Professor of the National Defense University of the Republic of Kazakhstan Yermekbayev Nurlan Baiuzakovich visited our Higher School of Social Sciences and Humanities with a guest lecture.

The main agenda of the lecture was the topic "Motivation and self-education - important conditions for achieving the goal." The professor focused on the fact that it is extremely important to maintain a balance between the theory of the profession and practical experience. And in order to become a truly competent expert in any field of professional knowledge, you need to constantly learn and work hard. 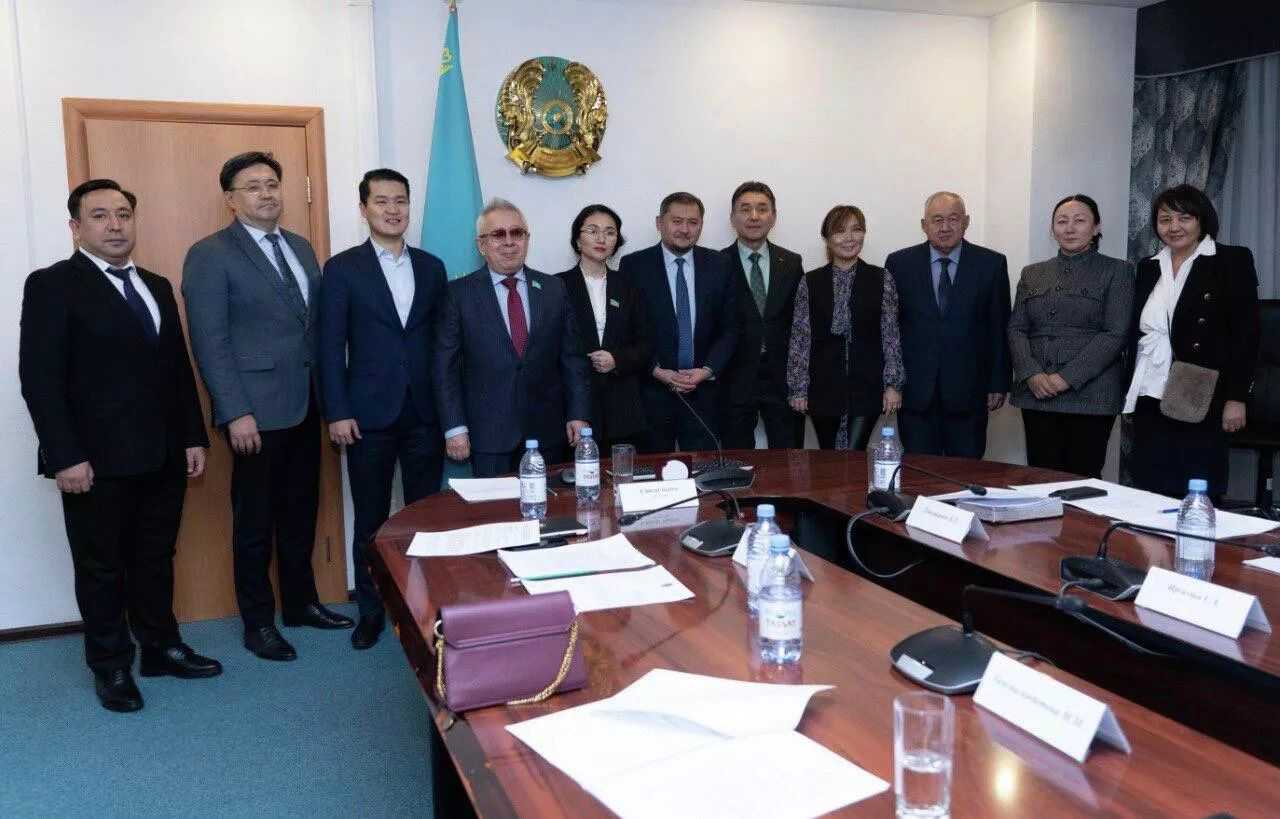 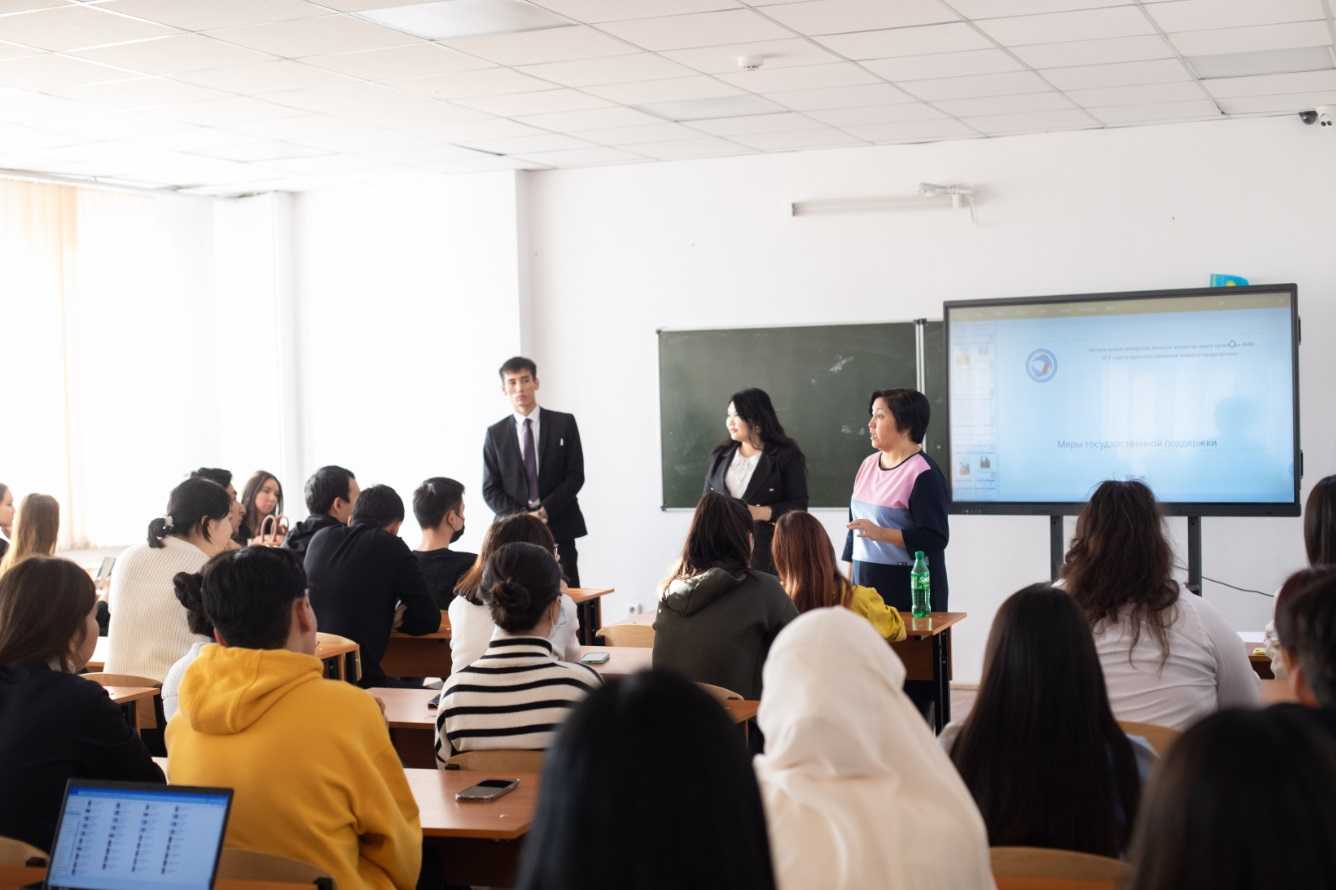 On November 23, 2022, a meeting was held between 4th year students of Astana International University and specialists from the....

On November 23, 2022, a meeting was held between 4th year students of Astana International University and specialists from the Employment Center of the Akimat of Astana city. At the meeting, experts provided information on state support measures: youth practice, first job, generation contract, silver age, social jobs, public works, short-term vocational training, state grants for the implementation of new business ideas. At the end of the meeting, the guests answered numerous questions from students We believe that this meeting will help our graduates in employment. 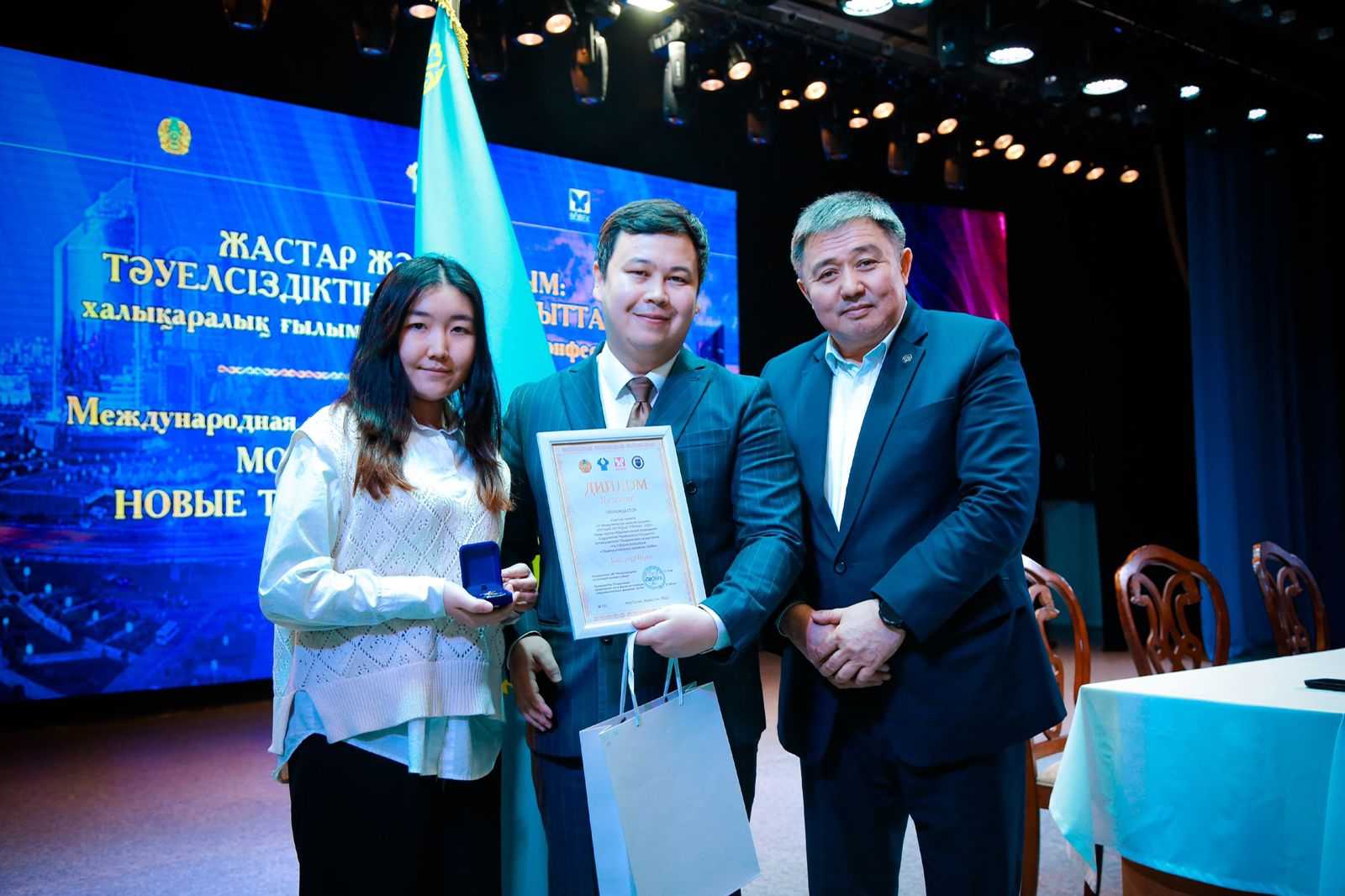 BEST STUDENT OF THE YEAR

On November 26 of this year, Bakytnur Shuak, a 4th-year student of the educational program Computer Engineering and Software of the Higher School of Information Technology and Engineering, was awarded the diploma of the I degree "Best Student of the Year", a badge and his certificate, organized in accordance with the message of President Kassym-Zhomart Tokayev to the people of Kazakhstan "A fair  state. One nation. Prosperous society" and for the purpose of popularization among the youth of the Republic of Kazakhstan.

The National Innovative Research Center "Bilim-orkenieti" and the "Academy of the Best Students" accept documents for the release of the International Book Collection of talented students "THE BEST STUDENT of the Republic of Kazakhstan-2022" in the field of science, art, sports and students with high organizational abilities. Inclusion in the collection is carried out on a competitive basis. 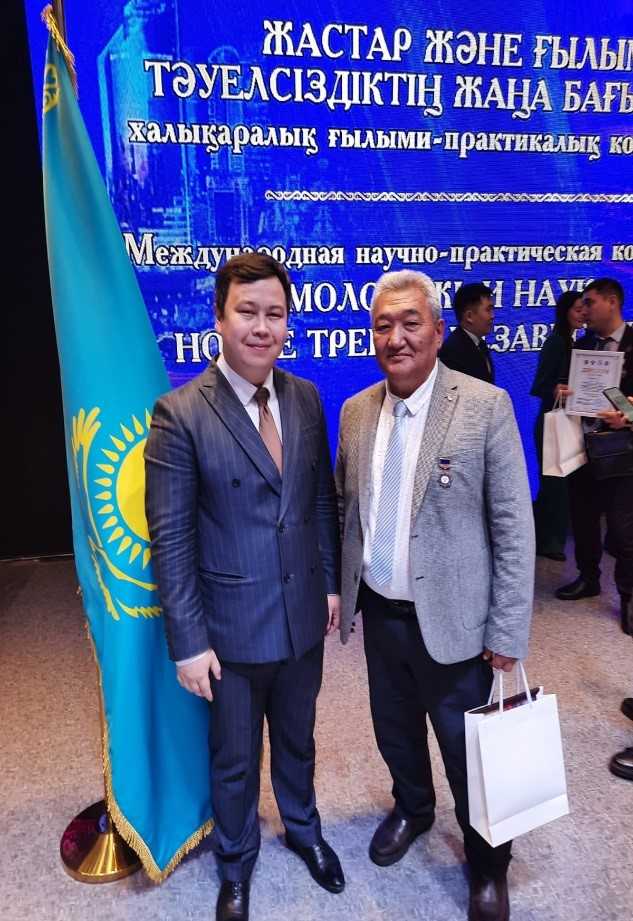 The Association of Legal Entities in the form of the Association “National Movement “Bobek” held the VI International Conference “Youth and Science: New Trends in Independence” on November 25, 2022 in Astana in the Palace of Schoolchildren named after M. Utemisov, within the framework of which there were presentations of international book collections “Best Student of the CIS”, “Best Teacher of the CIS”, “Best Young Scientist of the CIS” and “100 New Faces-2022” among the countries of the Commonwealth of Independent States.

The participants of this conference were teachers, doctoral students, undergraduates and students of universities in Kazakhstan and Kyrgyzstan. The participants were warmly congratulated by the representatives of the Embassy of the Kyrgyz Republic in the Republic of Kazakhstan, E.M. Abiyev the Head of the International Organization “National Movement “Bobek”, Z.E. Kolumbaeva Professor of the University “Turan-Astana”.

Congratulations to our winners! On November 23, 2022, as part of pedagogical practice, an open lesson was held by a 2nd year undergraduate

On November 23, 2022, as part of teaching practice, an open lesson was held by 2nd year master-student Mukhamedzhanov Nurym on the topic "Cellular mechanisms of DNA repair" for 2nd year bachelor students of the Biology educational program.

An open lesson was held according to the TBL method (team-based learning - a method of teaching in groups) under the guidance of a lecturer PhD Zhumagul M.Zh. The structure of the lesson consisted of a group test, an individual test and a situational task. The final grade was set taking into account the results of all tasks. The open lesson was held at a high level, the students were satisfied and noted that group work is one of the most effective ways of conducting classes and contributes to a better consolidation of knowledge. We wish success to Nurym in his future carreer! 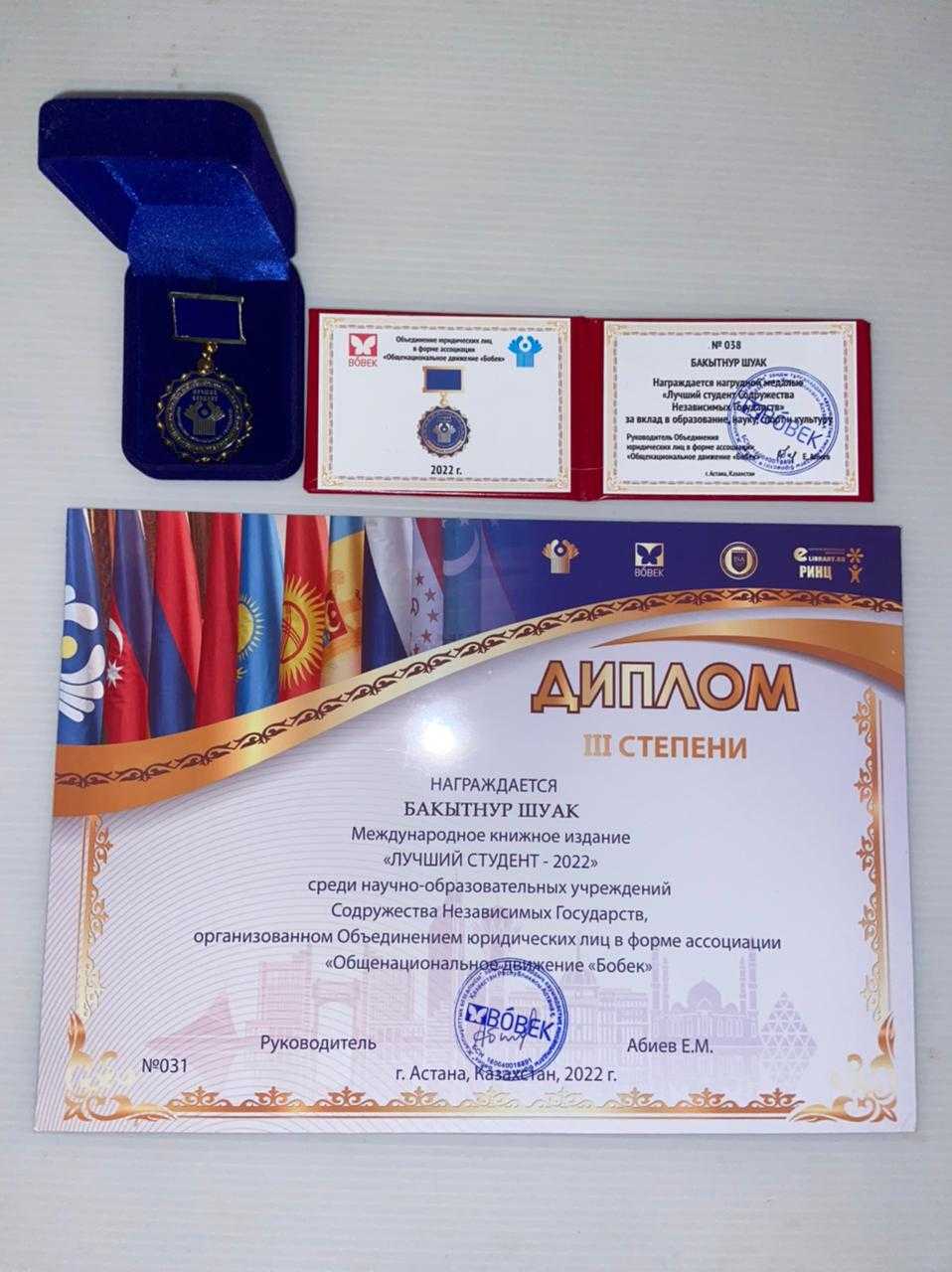 On November 25, within the framework of the project "VI International Book Edition", aimed at popularizing science and personal achievements of young scientists of the CIS countries at the international conference "Youth and Science: new directions of Independence", held at the M. Utemisov Palace of Schoolchildren in Astana, a student of the Higher School of Information Technology and Engineering of our University Bakytnur Shuak he was awarded diplomas of the II and III degrees "The best young scientists -2022" and "The best student - 2022", as well as a badge, a medal certificate and a "Collection of the best young scientists". A letter of thanks was also presented to the scientific supervisor of Shuak Kutepova L. T.

The main goal of the project is to identify the best significant and innovative projects of young scientists, promote scientific interests, and create a common unifying platform for the development of science. The best young scientists who have made an invaluable contribution to the development of science throughout the CIS took part in this project, and inclusion in the collection was carried out on a competitive basis.